Following my viewing of the trailer for Maniac, I immediately knew the importance this show would have in my life. Initially, I had doubts about the show displaying realistic portrayals of mental health, especially through a botched drug trial, but it proved me wrong. Maniac has now become one of my favorite TV series for its remarkably beautiful representation of life with extreme mental illnesses, and for communicating that managing depression is an achievable goal.

Without even a minimal basis of the story, Maniac reveals its intention through the use of colorful lighting and interesting cinematography. The bright colored lighting may seem disconnected from the dark and complex narrative, but it adds to the complexity of how mental illness varies in each life it affects. The consistent neon colors create a completely unique aesthetic that connects to the somewhat nostalgic storyline. The colors themselves seem to divert to create their own separate visual story among the emotions of the characters. The use of extreme wide shots also supports the narrative by expanding the environment the viewer is in. These frames allow the viewer to truly be immersed in the world depicted and be connected to the emotions the characters are displaying.

Diving into the plot of Maniac can seem overwhelming with the intricate storyline, but after unraveling all the sci-fi subplots, Maniac is quite simply a portrait of mental health; it doesn’t sugar-coat it, but rather shows the realistic adversities front and center. Owen Milgrim, played by Jonah Hill, suffers from paranoid schizophrenia and generalized anxiety disorder which has caused him to lose his overall sense of reality, lose his girlfriend, and become a burden to his family. Throughout the show, Owen is a seen as a quiet and apprehensive person and this is clearly due to the abuse that he has endured from his egotistical family. His oblivious parents and narcissistic brother see his disorder as a threat to their power and they control Owen by making him believe he is an inferior person. Being the “abnormal” person in a perfect family can be devastating to someone with a mental illness and prevent them from ever getting proper care. In episode 6, “Larger Structural Issues,” Owen’s struggle is best represented when he says, “What’s wrong isn’t that I’m sick. It’s that I don’t matter.” (The first 5 minutes of this episode is one of the best scenes about mental health in the entire series as it portrays a variety of different disorders in such a short amount of time.) Owen battles with his identity and finding a place in the resentful world he lives in. His schizophrenia makes him suspicious of his own motives and, therefore, makes him believe his is a dangerous and unwanted person.

Annie Landsberg, played by Emma Stone, suffers from borderline personality disorder and PTSD. She lost her mother at a very young age, her younger sister in a tragic car accident, and her father to a machine called ‘AVOID’ in which he literally avoids life. Due to all these unfortunate events, Annie becomes extremely depressed and abuses medical drugs with no one to support or help her. Annie is an outstanding portrayal of borderline personality disorder as she shows the realities of living and coping with the disorder. Annie hides behind arrogance, sarcasm, and resentment in order to face the reality she is presented with. She ultimately denies her mental illnesses and defense mechanisms believing that she’s just getting through life like everybody else. As Annie undergoes the trial, we see her character begin to open up and be true to herself. In episode 5, “Exactly Like You,” Annie’s character goes through a ‘proximity test’ where she is questioned and ends up admitting her depression and her fears. She finally comprehends her fear of abandonment, self-destructive behaviors, and unstable emotions. Watching Annie slowly recognize her longing for a secure family and admit her suicidal tendencies is heart-breaking to watch as we see her discomfort finally reveal itself. Her character entered the trial hoping to continue using the drugs she loves, but instead she is confronted with the depression she’s been suppressing for years.

As the show comes to an end, both Owen and Annie confront their disorders in a manifest of different stories and narratives. Owen ends up directly confronting his schizophrenia through the imaginary character of Grimsson, which is a representation of his real-life brother, Jed. He is finally able to remove Grimsson and his delusional spy narrative from his own mind; therefore accepting his disorder and understanding it’s a part of who he is. Annie confronts her grief and PTSD by finally being able to talk to a figment of her sister and gain closure. This allows her to move on her from obsession with her sister’s death and accept her circumstances for the way they are. In Episode 9, Annie confesses to her sister, “Sometimes people leave and we don’t know why.” This quote encapsulates Annie’s struggle with BPD as well as her end with grief. In the final episode, Owen refuses to be belittled to a sick, insane person and defies his family by believing his own truth. Unfortunately, this forces him into an asylum-like facility where he’s stuck believing he’s dangerous to society. Annie returns to her lonely life and quickly realizes that her life is meaningless without Owen by her side. She decides to break Owen out of the psychiatric facility to fully free both of them from their toxic environments. Maniac has one of the most beautiful final shots presenting Annie and Owen smiling together for the first time in the show. This image summarizes all the character growth and emotional journeys the two went through in one beautiful moment. 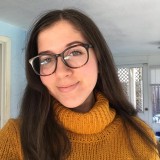 Riley is a Los Angeles native who is currently studying Creative Writing and Cinema Studies in Seattle, WA. She loves to write poetry, screenplays, and film analysis pieces. Her favorite film is Stand by Me and her favorite director is Rian Johnson.

Riley is a Los Angeles native who is currently studying Creative Writing and Cinema Studies in Seattle, WA. She loves to write poetry, screenplays, and film analysis pieces. Her favorite film is Stand by Me and her favorite director is Rian Johnson.

I Am Not Okay With This: A Familiar Exploration of Teenage Rage, Grief and Desire

The Good Place Finale: The Uncertainty of the Unknown