Amidst the year of anti-rich films stood Matt Bettinelli-Olpin and Tyler Gillett‘s horror comedy Ready or Not, starring Samara Weaving as Grace, a newlywed bride who finds herself trapped in the worst wedding night imaginable with her in-laws. No, not canceled flights to Hawaii, or an interrogation as to when the Le Domas family would receive a new heir; more like the next victim in a peculiar family tradition.

We’re thrown directly into the occult game of hide-and-seek in the opening scene, following young Daniel Le Domas through the dim yellow walls. In a fork-in-the-road situation, he remains loyal to the rules of the game, and alerts his family of a wounded man named Charles. The man is shot with a speargun and dragged away by family members cloaked in robes and ceremonial masks. Thirty years later, Daniel (Adam Brody) returns to the mansion all grown up for his brother Alex (Mark O’Brien) and Grace’s wedding. At their after party, Alex and Grace sit side by side as Tony (Henry Czerny) explains the family history, happily flaunting the success of their ancestor’s deal, and what it meant for the Le Domas Family Games company. As Grace is told to read her card, she giggles at the sight of hide-and-seek, while those around her turn into pale ghosts. There’s no ability to have the card changed, and as it is written, so it shall be. The Le Domas family sends Grace off to find her hiding spot, while they arm themselves each with a respective weapon. Enter the ominously giddy record, eagerly chanting that it’s time to run and hide throughout the Le Domas mansion. The humorous jingle sets the tone for the rest of the film: eerie, wittily chosen, and just a tad bit demonic.

The world of the Le Domas family is uncomfortably inviting. Despite their skewed morals and strange rituals, we want to get to know them. They’re welcoming to both the audience and, for the most part, Grace. Perhaps it’s not the old-fashioned weapons they carry or their “sense of faith” that are the most terrifying, but the sense of normalcy and comfort that they treat Grace with -with the exception of Daniel’s wife, Charity (Elyse Levesque), and the eldest Le Domas, Helene (Nicky Guadagni). Put aside their family fortune, place them in the suburbs, and they could potentially even pass as a modern family with the average domestic problems. Without their bloodthirsty need to be rich, the Le Domas family would be entirely different people.

Grace learns what the price of being a Le Domas is the hard way. Unlike Charity or Fitch (Kristian Bruun), who had to win easy games of chess and Old Maid, Grace must win the game of survival. She enters the deadly web of hide-and-seek unarmed, with only her brains and sneaker-clad feet to carry her through the mansion. Grace does stumble across an old shotgun hanging on the wall, but by the time she must use it to defend herself, it’s back to square one as she fights her way through the kitchen with fast-paced instincts to get past the butler.

Weaving had already established herself as a scream queen prior to Ready or Not, but it’s her standout performance that carries the audience and film towards its successful suspense. Grace is our heroine, the final girl, from the moment the game begins. Through her realizations of how truly bizarre her in-laws are, we dip further into Le Domas’ family history as tensions between the seekers and their victim rise. She’s the only character with a soul, as Daniel best says, in the whole ensemble. Her comedic timing and gut-wrenched screams only emphasize how dangerous of a threat the Le Domas’ family is; sinister, but occasionally laughable elites that would do anything to maintain their wealth.

In early adaptations of the film, Grace faced the worst possible outcome: death. Rather than dodging the strike from Alex, it was originally written with the bride falling victim to the Le Domas games, and the family getting away with her murder. However, co-director Gillett revealed that he wanted a more optimistic reaction from audiences, rather than disappointment.

As we learned in the film, the obscure bouts of wealth that the Le Domas family hoarded traces back to a satanic agreement. In exchange for fortune, every new family member must draw a card from Mr. Le Bail’s puzzle box, with only hide-and-seek being the one that requires murder. Another considered ending, explained by producer Chris Villella, expands on the secret world of the 1%.

“We also wanted to do this end tag where were these two joe schmoes walking down this extravagant ballroom, a la Mar-a-Lago, and they walk into a convention hall and it’s a Le Bail conference, and there’s a whole bunch of rich people there to show the expanse of it all.”

Ready or Not is crafted with the distinct voices of its creators. Allegories towards classism and elitist culture are prominent enough to understand, but painted in the way that makes it unique and thought-provoking. Samara Weaving brings her A-Game to the violently delicious dark comedy as Grace, serving as our grounding point and heart of the film. Supported by equally strong performances, her in-laws are just as entertaining as they are dangerous. The film is a surprising thrill ride, with enough jokes and newfound challenges to keep audiences wrapped up until an explosive finale. With their upcoming installment of Scream 5, Bettinelli-Olpin and Gillett have established themselves as directors to keep an eye on as they put their spin on one of the most iconic horror franchises in film history. 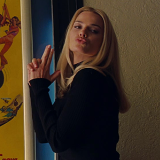