I have been listening to mashups all throughout this year, more than most types of music, as a form of comfort. Something about two or more different songs being able to fit together, similar to the way a producer would sample a song for a hip-hop artist to be able to rap over, has made me smile unlike anything else. The way the meaning of the song’s lyrics could be recontextualized just through the simple switch of an instrumental has always been fascinating to me. For example, when Bandcamp mashup queen Cacola puts the vocals of “Through the Fire and Flames” over the tight disco grooves of Bruno Mars’ “Treasure”, she makes the song less about a perilous journey and more like a dance party.

There’s genius William Maranci creating the most joyous song ever written by throwing Earth Wind & Fire’s “September” vocals over the sad, nostalgic synths of “Kids” by MGMT, making the lyrics of “September” seem even more triumphant by overcoming the melancholy of missing the times one spent as a child. Or even the king of making people mad through his mashups, Neil Cicierega, takes multiple fragments of different pop songs like MIA’s “Paper Planes” and Disturbed’s “Down with the Sickness” and Homer Simpson grunts to create the messy, hilarious “Annoyed Grunt”, giving a random mish-mash of weirdness with the intent of confusing the listener. However, one of the greatest mashup artists is the Pittsburgh DJ Gregg Gillis, also known as Girl Talk. His fifth and last album (up until this point of writing) is All Day, which, much like his previous records, is a continuous extravaganza of over 300 samples from different genres, so tightly composed and edited together, built upon catchy hooks, instrumental melodies and raps, a grin will never leave the listener’s face, and said listener will never want to stop dancing.

There was a listener who never wanted to stop dancing, and that was director Jacob Krupnick. In a Q&A, he talked about his life, about how he moved to New York City as a child and would dance and ride his bicycle on the streets. His eventual photographs of Miami would showcase the city in its majestic glory. The eye of the one behind the cameras shows that of a wanderer, a tourist, someone who is brand new to the city, but so enthralled by the sights of the palm trees, the salty smell of the ocean, and the tall buildings that surround them. Like a child who is walking through New York City, riding their bicycle, dancing like nobody’s watching, falling in love with the sights of the city.

I thought about the stories Krupnick told when I watched his 2011 film Girl Walk // All Day for the fifth or sixth time. This is a film that can be summed up as a feature-length music video. It showcases three dancers, The Girl (Anne Marsen), The Gentleman (Daisuke Omiya), and The Creep (John Doyle), their encounters with each other, and their quests to find someone to dance with them in the five boroughs of New York City. The movie is set to the titular album by Girl Talk, and the film’s story, characterization, and heights of emotion are told through dance and the sounds of the mashups being played. The choreography, combining different styles of dancing, such as hip-hop, ballet, and tap, is similar to the way Girl Talk mashes up different genres of music like funk, metal, and pop. 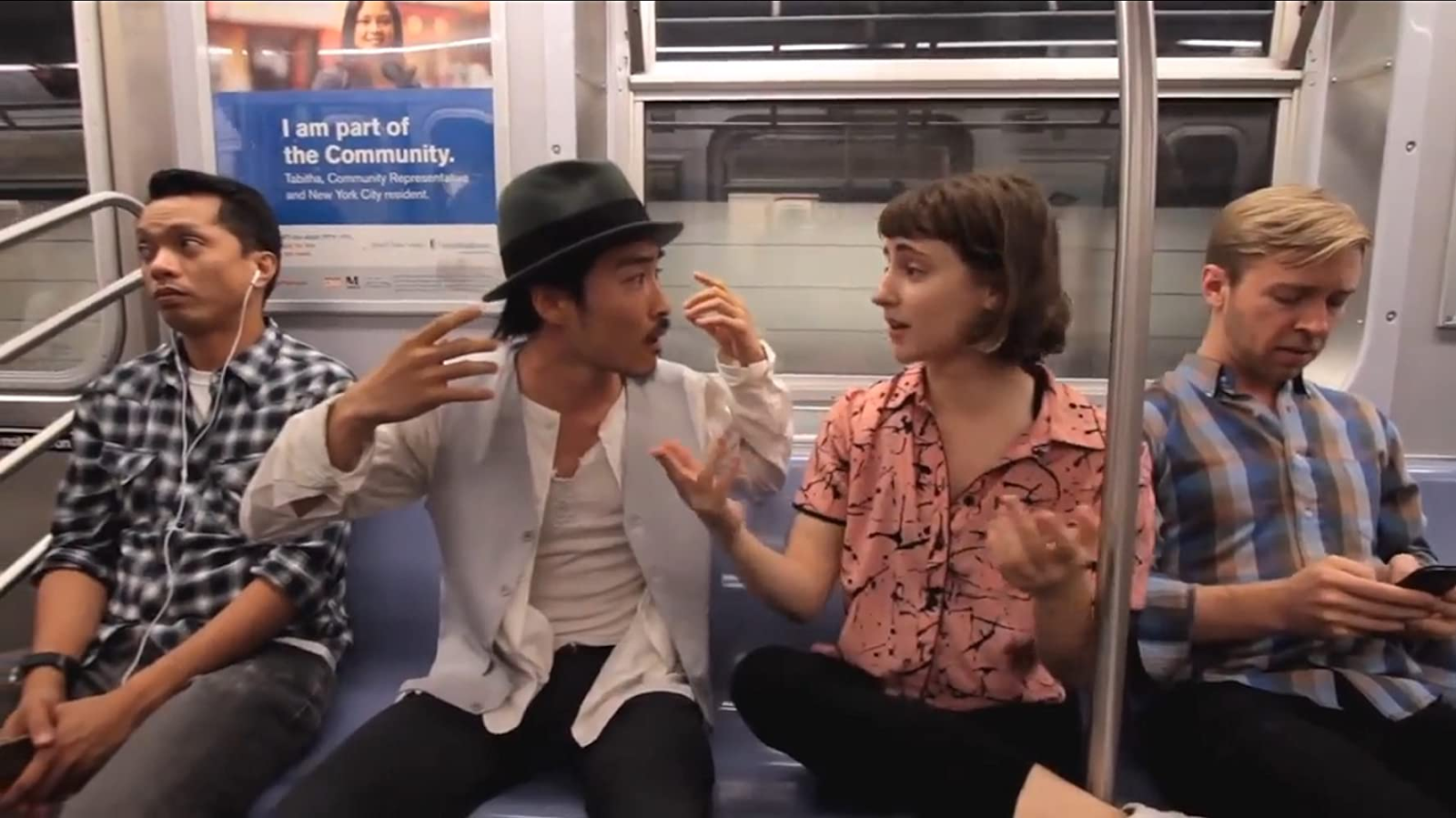 The film opens with The Girl quitting her job as part of a ballet troupe due to her dissatisfaction with the way she has to dance. She feels trapped and unable to express her full self creatively. The studio is shot in black and white as the piano player plucks a waltz, but once it starts to fade out and the non-diegetic, thunderous chords of Black Sabbath’s “War Pigs” are heard, the film loses its black-and-white cinematography, and colors are brought back in. The Girl begins to smile, move her body in rhythm to the music, and stand up to her boss all while Ludacris’ hilarious, playful, and angry “Move Bitch” is being rapped over, fitting the mood of the scene exquisitely, as The Girl’s dancing is funny, mad, and also relieving, unleashing every bit of frustration she has in her choreography.

When The Girl moves further into the city, we see the same kiddish glee that Krupnick had when he was a young boy. She jumps in line at the Staten Island Ferry, performs graceful ballet twirls and invites people to perform the moves made famous from Beyonce’s iconic “Single Ladies” video. She can’t stop looking up in awe at the tall buildings near her, runs up and down the stairs of Yankee Stadium, and even manages to help make a child feel better through dancing with her.

Anne Marsen’s performance is excellent, her fusion of different dance styles is sublimely done, with none of the sudden transitions from one method to another feeling jarring or out of place. In Mindy Aloff’s essay “Dance on Film”, she argues that “great dance stars are rarely great choreographers.” And Girl Walk // All Day, really is the exception to the rule, as Anne herself is a choreographer, with Krupnick himself stating in an interview with the New York Times, “It has nothing in common with the pleasure of watching an amazing ballet dancer. It’s more like watching a chameleon on fast forward. She’s playing with her body movement the way a rapper might play with words.” Marsen commands each frame she is in, and the camera knows it. Some of the best parts of the film are when the camera is completely still, and Marsen is showing off how incredible her technique is. In the fifth minute of the movie, the shot of the public telephone area where she is dancing resembles that of an auditorium stage, with each pole on the left resembling that of the wings of a stage deck. The same commanding aura would happen as she dances in front of a fountain and in an alley, each performance bolder than the last, and matching each mash-up perfectly.

However, my favorite scene in the film is when The Girl goes on a date with The Gentleman. It’s a very romantic, care-free day filled with arcade games and a trip to the museum, all set to a hilarious mashup of the filthy lyrics of Pitbull’s “Hotel Room Service” with the playful, cute instrumental of Depeche Mode’s “Just Can’t Get Enough”. They jump around and run like a teenage couple newly in love and unable to control their excitement. But the greatest moment of that scene happens when they make it to the subway. They sit, make jokes, but then encourage everyone on the train, including a pole dancer, to jump and dance with them. All of them were real New Yorkers riding the subway, but felt some need to feel the groove with The Girl and The Gentleman. All of them dancing to a heavenly mashup of “Digital Love” by Daft Punk and “Gossip Folks” by Missy Elliott. A joyous celebration.

And that’s what I continue to get from Girl Walk // All Day. A celebration. A celebration of New York City, a celebration of dancing, a celebration of mashups and how the best ones are just works of genius, a celebration of different types of music and the impact it has on us. 2020 was a miserable year, and I don’t need to add another article to the world about how bad it all was, the amount of existential crises I’ve had, how many times I nearly relapsed back into old self-destructive habits, and the crushing loneliness despite living in a house with four other people. Watching this movie, or at least scenes from this movie, at least three times a week has brought me such joy. Just seeing two people perform a romantic ballet to an Ol’ Dirty Bastard rap with a Radiohead instrumental underneath, or to see the landmarks of New York City in their full, majestic glory, or to see the simple act of people walking together in a previous modern era without the fear of a deadly virus, or to hear brand new songs constructed so lovingly out of previous ones I loved so much. This is the film I needed in 2020.

Action Bronson in The Irishman and Rappers in Film